Photos from the Floating Christian Endeavor 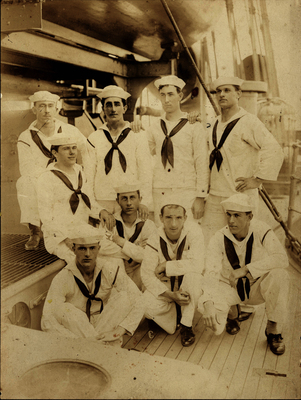 "When it was sailing as part of the Great White Fleet E. Ray Sanders, who was chosen to lead all of the Endeavor sailors on the fleet, is in the back row on the far left." A History of the Floating Societies of the Christian Endeavor by Robert A. Danielson. First Fruits Press: 2014. p. 46

"Following the Spanish-American War, President Theodore Roosevelt modernized the Navy, and to demonstrate the U.S. military power on the seas following the defeat of Spain, a fleet of modern battleships was sent to travel around the world. The sixteen battleships with additional support vessels left on December 16, 1907 and returned on February 22, 1909. Called the “Great White Fleet” because of the white paint used on the vessels, this exhibition of military power also contained Floating Christian Endeavor Societies on at least two vessels, the Vermont and the Nebraska. A fireman from the Vermont Society, E. Ray Sanders, was made the president of the “Fleet Union of Floating Endeavorers” for all of the ships in the “Great White Fleet”. He was even granted a special pass by the admiral to visit the other ships as desired. On returning, Sanders along with Antoinette Jones spoke in New York City along with a British Floating Christian Endeavor member from the British ship, Inflexible." A History of the Floating Societies of the Christian Endeavor by Robert A. Danielson. First Fruits Press: 2014. p. 45.