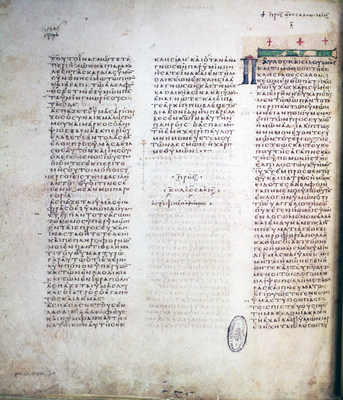 History of the Codex

The first collation of the manuscript, made in 1669, by Bartolocci, then librarian of the Vatican, exists only in manuscript in the Bibliothèque Nationale in Paris. Another was made by Birch, 1788-1891. The collation made for R. Bentley by an Italian named Mico was published by Ford, 1790. J.L. Hug wrote a learned Commentatio de antiquitate codicis Vaticani (Freiburg, 1810). The manuscript was then in Paris, but it was later restored to Rome, where it became practically inaccessible. An inaccurate and critically worthless edition of the whole manuscript was prepared by Cardinal Mai between 1828 and 1838. C. Vercellone, J. Cozza and G. Sergio published an edition of the entire codex in 6 vols. in Rome, 1868-81; a typographical facsimile appeared between 1868 and 1872 and a photographic reproduction was published by the Vatican (1889). -A Bibliography of Greek New Testament Manuscripts. J. K. Elliott. 2nd Edition. 2000. p. 47.