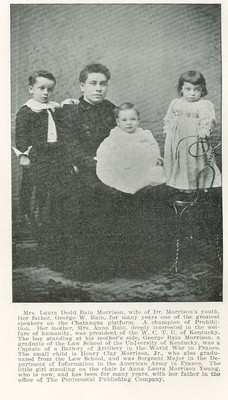 Mrs. Laura Dodd Bain Morrison, wife of Dr. Morrison’s youth. Her father, George W. Bain, was for many years one of the greatest speakers on the Chatauqua platform. A champion of Prohibition. Her mother, Mrs. Anna Bain, deeply interested in the welfare of humanity, was president of the W. C. T. U. of Kentucky. The boy standing at his mother’s side, George Bain Morrison a graduate of the Law School of the University of Kentucky, was a Captain of a Battery of Artillery in the World War in France. The small child is Henry Clay Morrison Jr., who also graduated from the Law School, and was Sergeant Major in the Department of Information in the American Army in France. The little girl standing on the chair is Anna Laura Morrison Young, who is now, and has been for many years, with her father in the office of The Pentecostal Publishing Company. From left to right: George Bain Morrison, Laura Dodd Bain Morrison, Henry Clay Morrison Jr., Anna Laura Morrison